When Carmen Guadalupe Vásquez Aldana had a miscarriage from a pregnancy after being raped in El Salvador, she was charged with aggravated homicide. She was 18 at the time, and sentenced to 30 years in prison, according to Jurist, which is supported by the University of Pittsburgh School of Law. Last month, she received a pardon.

The U.N. has supported going through some of the sentences of women who needed an abortion due to certain situations. El Salvador has one of the strictest laws on abortion in the world. Even if the mother’s life is at risk, it is illegal.

Paula Avila, a lawyer who serves as an advocacy advisor for the nonprofit organization Center for Reproductive Rights, has been trying to ease the total ban on abortions in El Salvador.

“This is the most significant news that we have received from Salvador in the 15 years of work we have been doing there,” Avila said to NPR. “This is the first window of hope that some of the other women will be released. It’s a huge victory for all the women and girls who suffer as a result of this law.”

Professor Celeste Kostopulos- Cooperman, who works in the Department of World Languages and Cultures, was impressed with the breakthrough that the government in El Salvador gave Guadalupe when she received the Pardon.

“Carmen Guadalupe’s release from prison is quite extraordinary. Even more remarkable is the fact that women in El Salvador and in many other parts of the developing world have no reproductive rights or access to adequate health care,” said Kostopulos- Cooperman. “Carmen’s case is particularly disturbing because there was no forensic evidence that she had intentionally aborted her child.”

Under the extreme ban on abortion in El Salvador, 17 women in 2014 have been criminalized and imprisoned. According to the Center for Reproductive Rights, a nonprofit which defends reproductive rights for women worldwide, the country prohibits women from receiving an abortion no matter the circumstances — including rape, incest, or even if it is to save her own life under the 1956 Penal Code. Under El Salvador’s constitution, the right to life is recognized at the moment of conception. 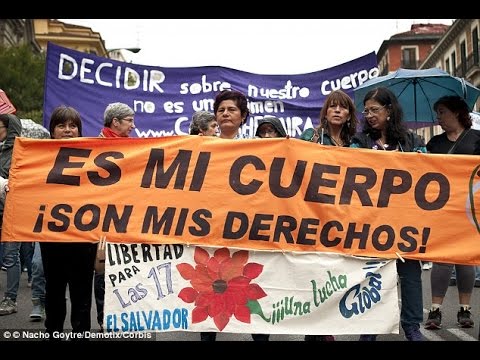 According to NPR, the women all come from different backgrounds, from small villages, cities, and rural farm areas. They are all different ages, and all have different social statuses and jobs. Yet collectively, they have served more than 130 years together, according to the Center for Reproductive Rights.

The one thing they are said to have in common is they were tried and imprisoned after experiencing traumatic pregnancy complications, which is due to why they had the abortions, according to the Center for Reproductive Rights.

Many of the 17 women had the abortion had been convicted under murder and had been sentenced for up to 40 years, according to the Center for Reproductive Rights.

According to several reports from the U.N. Population Division, many young girls seek to have an abortion in El Salvador as young as 10 years old. A group of U.N. human rights experts had urged El Salvador to lift the sentence on all of the women jailed for their abortions which were a result of rape or pregnancy complications.

In May 2013, the Supreme Court of El Salvador refused to reconsider their harsh laws on abortion, despite the international encouragement. According to the court’s official site, they would not allow doctors to perform abortions to women who were developing a fetus with problematic circumstances, such as fetuses without a brain, if the woman’s life was threatened by kidney failure, or lupus symptoms that would be aggravating to the pregnancy had been created.

Professor Kostopulos- Cooperman explained the struggles of how women in El Salvador do not have the reproductive freedoms they deserve.

“One wonders how many countless other women are still behind bars because the legal mechanisms do not recognize their basic human right to dignity and self-determination,” said Kostopulos-Cooperman. “Reproductive health and freedom are at the heart of this issue and it is quite clear that a great deal needs to be done to ensure that these fundamental human rights be respected worldwide.”