President Barack Obama has reassured Israel that the U.S. is Israel’s strongest supporter after some fear over the outline of Iran’s new nuclear agreement, according to The Guardian.

In the agreement, Iran and six world powers, including the U.S., U.K., France, Russia, China, and Germany, have devised a concept to curb the Iranian nuclear program in exchange for lifting sanctions. This agreement is thought to be one step closer to ending the 12-year standoff, according to BBC.

Kenneth Cosgrove, a professor in the government department who has special interests in U.S. foreign policy, recognizes that this is the first time the relationship between the U.S. and Iran has attempted to break down a harsh barrier.

“This is the first time that one of the several possible thaws in the U.S.-Iranian relationships has borne fruit,” said Cosgrove. “There have been missteps on both sides and both sides will try very hard to hold to on the gains made in recent weeks.”

The six world powers want to ensure that Iran will not be able to make a nuclear weapon, according to BBC. Iranian officials have said they are not seeking a nuclear bomb. Instead, the country is interested in exercising its right to run a peaceful nuclear industry.

Some critics believe Obama is endangering Israel’s security, while supporters think it is a smart move to show strength in the alliance. The deal leaves Iran with the ability to build a bomb, which has alarmed Israel and Iran’s neighbors in the Gulf. 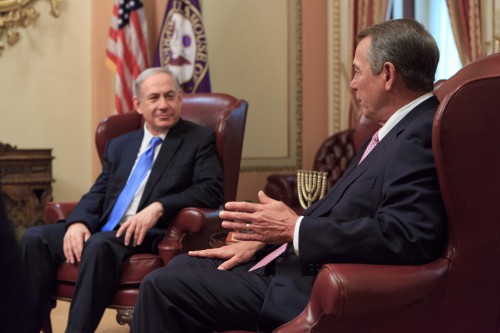 Professor Susan Sered of the sociology department believes this statement by Obama was not controversial, but valid for the U.S. and its connections in the Middle East.

“I think this was the right thing for the president to say,” said Sered. “It’s not a matter of ‘diving into’ a link with Israel.”

Sered has a master’s and Ph.D. from the Hebrew University of Jerusalem, and moved from the U.S. to Israel to become a professor at Bar‑Ilan University. She was one of the editorial board members for Social Issues in Israel and started teaching at Suffolk in 2005.

“That link [between the U.S. and Israel] is historical, deep and, in my opinion, honorable and valuable for both countries,” she said. “For all of its flaws and problems, Israel is a democracy and as such the appropriate ally for the U.S. in the Middle East.”

“The President is trying to solidify his standing with the pro-Israel and Jewish communities,” said Cosgrove. “We’ve been linked to the troubles of Israel since President Truman pledged U.S. recognition and support for Israel against the advice of his own Department of State.”

Cosgrove said the relationship between the U.S. and Israel is nothing new and is not likely to change.

Obama answered questions from Israeli officials on the the nuclear ambitions that Iran has, and said he sees the deal as an opportunity to halt the assembly of such weapons.

“There is no formula, there is no option, to prevent Iran from getting a nuclear weapon that will be more effective than the diplomatic initiative and framework that we put forward – and that’s demonstrable,” the president said to The New York Times.

However, Israel’s Prime Minister Binyamin Netanyahu, does not support the deal, according to The Guardian.

“A better deal would roll back Iran’s vast nuclear infrastructure, and require Iran to stop its aggression in the region, its terror worldwide and its calls and actions to annihilate the state of Israel,” Netanyahu said during an interview with CNN Monday.

The U.S. reassured Netanyahu that Israelis have nothing to worry about, according to several news reports.

Cosgrove doesn’t look at which country has more financial ability than the other.

“I would argue Iran is very efficient in its use of defense assets both symmetrically and asymmetrically,” he said.

With the foreign policy concerns regarding the growth and advancement of the group known as the Islamic State, Obama reiterated that the U.S. will remain committed to defending Israel under any circumstances.

Roberto Dominguez, a professor in the government department, looks at the challenges ahead for the Obama administration in the U.S.

“The new challenge for this administration lies now in disarticulating the danger coming from those who have profited from the escalation of tensions here in the United States, Iran and elsewhere,” said Dominguez.