For some international students, they have to become experts at adapting to different places.

Marketing major Sam Scanlan is originally from Brisbane, Australia where he lived until he was five years old. After that, he jumped from England, Las Vegas, and then finally moved to Nassau, Providence, which is the capital of the Commonwealth of the Bahamas. Scanlan told the Journal in an interview of his immediate perception of Boston and Suffolk.

“The general vibe of the people is very different. Even with so many people here, it seems like everyone knows everyone. If I bump into someone on the street, I probably have mutual friends with them on Facebook,” said Scanlan.

Nassau may hold the largest population in the Bahamas and have city life, but Scanlan was surprised by the difference of pace between Boston and home.

“It’s interesting. It runs a lot slower there,” said Scanlan. “The Bahamas, in general, is just a more relaxed atmosphere. But at the same time, it makes it hard to do business, get something done, or even figure out whether or not they have something at the grocery store.”

Scanlan explained that the general prices of goods in the Bahamas are comparable to those in Boston. Although, the goods are less reliable because of the relaxed atmosphere.

“They might have something one week and it’s gone the next,” said Scanlan. “In Boston, for the most part, things are usually on time. You never wonder if they’re going to have milk that isn’t expired at the store like in Nassau.”

He shared he is happy he ended up in Boston, specifically at Suffolk, even though he originally applied to several other schools in the Greater Boston area.

“I really like it,” he explained. “The location, being downtown isn’t a complaint, so living in dorms my first two years was definitely a plus. And I met a lot of great friends.”

Over the summer, Scanlan had worked for his father’s business, which are a few of the Anytime Fitness’s in the Orlando area. But in Boston, it’s difficult to find work because of the student visa he has. 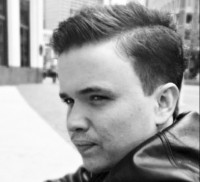 “What the student visa says is you can’t work, but you can work on campus,” he said. “But the problem is that most of the campus jobs, from what I’ve seen, are federal work-study, of which I cannot have since it is a form of Federal Financial Aid, which non-U.S. citizens cannot have.”

“It’s not easy to get a job as an international student. It’s very complicated,” he said.

As Scanlan begins his sophomore year at Suffolk, he is beginning to think about internships, something that could also be very difficult to get, even though he knows he needs one before he graduates per his major.

“The only real disadvantage I have as an international student trying to get an internship is I can’t go out to a company and just apply to be an intern. Unless it’s an unpaid internship, I would have to do it through the school where I can get class credit instead.”

“I cannot even get a social security number and everything I fill out nowadays makes you provide one,” he said.

It may be difficult to get a job in the U.S. for international students to pay for tuition as Scanlan tried to find gaps in the system.

“I was actually going to start investing, but for that I would need a social security number, but I can’t get that, so I would need a tax ID number,” said Scanlan. “But they make it so difficult for me to get one. I have to provide proof of where I live, I have to go to the Social Security office and have them provide me with a letter saying how I cannot get a social, it’s just a whole long process to get this number. It would just be nice if it was simpler.”

To make it worse, Scanlan would have to provide proof of identification in very specific ways for the tax ID number.

“The options given are a housing lease and a driver’s licence. Well, I don’t drive and I don’t own a house,” he said. “But I need to somehow sit down and figure it out because I would have to get a tax ID number to get an internship.”

Scanloa shared how Suffolk charges students more than they need to. When there are some holidays, such as Thanksgiving break, the dorms will make students leave the on-campus housing facilities and find somewhere to go, or otherwise they have to pay a fee to stay there.

“The dorms are ridiculous. It’s $60 a night for a dorm that you already paid for to stay there during holidays. Luckily, I have a sister that lives in Boston that I can just stay with, which is what I did for Thanksgiving break last year, but some aren’t so lucky on that.”

Some international students agree that students should pay a fixed rate for longer breaks, but not for the smaller ones that some of the students at the school don’t even celebrate.

“I understand doing it for Christmas and summer because those are long breaks. But for Thanksgiving, it seems a bit ridiculous to me because it’s four days and only American students celebrate it. Students have to pay $240 for four days on top of what you already pay for that dorm.”

Scanlan and his family are use to paying for his private school fees. Scanlan explained that the public schools in the Bahamas aren’t as nice as the ones in the U.S., and in some cases, they can be unsafe. After his family moved there and after much discussion, they decided that they would pay for the tuition at St. Andrews School, which was the International School of the Bahamas. There, the tuition ranged by year, anywhere from $13,000 to almost $15,000, according to the school’s website.

Since he is an international student, he could potentially get a private loan in the United States, but his parents found it best to pay with the school’s payment plan, which goes by a monthly basis as Scanlan explained that his father was able to save enough to put all of his children through college so far. Although, what also helps him is his $10,000 merit scholarship.

“My student visa lasts until 2018, which is the year I’ll be graduating,” said Scanlan. “My ultimate goal is to live and work in the United States. I hope to get an internship and hopefully get offered a position after I graduate. Otherwise, I can get a post-graduate degree, where I would just have to apply for another student visa.”