Protesters of all races and ethnicities marched the streets of Boston Thursday night, demonstrating their eagerness to change the justice system following a New York grand jury’s decision to not indict a police officer who used a chokehold on Eric Garner during an arrest.

Garner was killed in the incident. The protest also followed a separate decision to not indict Darren Wilson, a police officer who shot and killed unarmed Michael Brown in Ferguson, Missouri.

The meeting spot for the protest was at the Boylston MBTA station on the Boston Common at 7 p.m., where organizers had megaphones shouting chants with the crowd repeating back to them. Protesters flooded the Common, and then moved onto Tremont Street, where police couldn’t stop the people walking in between cars, starting the march towards the State House. 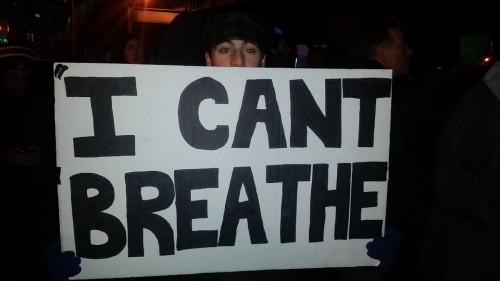 Boston’s annual tree lighting was happening in the Common simultaneously.

Several thousand people started making their way up the Common and onto the stairs of the State House, where four police officers were standing guard at the gate. When several women charged for the top of the stairs, the officers crashed against the side of the gate.

Others chanted throughout the march, as it turned back onto Tremont Street and shut down the roadway.

“Back up, back up, we want freedom, freedom,” was chanted.

When the group of thousands went through Downtown Crossing and onto State Street, protesters lay in the middle of the road, essentially shutting down the street. Police were forced to shut down the street as everyone got back up to turn toward Boston City Hall.

People chanted from the ramp and covered the steps as people lay on the ground again while police followed the group. The group moved after 10 minutes, as police were riding nearby on bicycles while they closed down several more streets lining the North End before passing TD Garden.

During a march into Cambridge, the protest organizers, who were wearing reflective gear, had everyone stop, link up, and regroup with the rest.

“No Justice. No Peace. No racist police,” was shouted until people started to make their way down the street again, making a loop back around as they crossed the bridge and passed TD Garden again.

Lining Beacon Hill, the group got in a circle in front of Rite Aid and Dunkin Donuts on Cambridge street, shopping all traffic at the intersection as an estimated 100 people got in the center of the circle, lying down with their hands up. Four of the demonstrators started shouting and chanting as the circle of people followed.

The protesters then moved back to the State House.

Helicopters could be heard overhead.

The protests scattered into T stations, where protesters were standing on the tracks of the Red and Green lines around midnight.